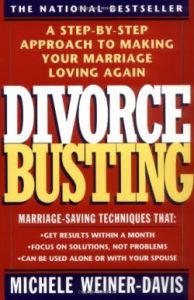 This article is a great resource for couples that may have some confusion, disagreement or frustration in their relationship. Michele Weiner-Davis is the author of “”Divorce Busting,” a bestselling book on how to get your marriage back on track. She is also a relationship expert and marriage therapist. The article below, discusses an interesting cycle that marriages go through. Read through each stage to see where your relationship fits! Realize that you are not the only one and that there are various resources our there to help you push through your battles and disagreements.

As a long-time observer of relationships, I can tell you that, like children, marriages go through different developmental stages and predictable crises. But because people are unfamiliar with the normal hills and valleys of marriage, these predictable transitional periods are often misunderstood, causing over-reactions. Those who manage to weather these universal stormy periods usually come out the other side with greater love and commitment to their spouses. That’s why I want to offer you a Marriage Map.

Head over heels in love, you can’t believe how lucky you are to have met your lover. Much to your amazement, you have so much in common: you enjoy the same hobbies, music, restaurants and movies. You can finish each other’s sentences. When you pick up the phone to call your partner, he or she is already on the line calling you. When little, annoying things pop up, they’re dismissed and overlooked.

At no other time in your relationship is your feeling of well being and physical desire for each other as intense as it is during this romantic period. The newness and excitement of the relationship stimulates the production of chemicals in your bodies that increase energy, positive attitudes and heighten sexuality and sensuality. While in this naturally produced state of euphoria, you decide to commit to spending the rest of their lives together. And marry, you do. But soon, your joy gives way to an inevitable earth-shattering awakening; marriage isn’t at all what you expected it to be.

Stage Two- What was I thinking?

In some ways, stage two is the most difficult because it is here that you experience the biggest fall. After all, how many miles is it from bliss to disillusionment? Millions. For starters, reality sets in. The little things start to bother you. You realize that your spouse has stinky breath in the morning, spends way too long on the toilet, leaves magazines and letters strewn on the kitchen counter, and never wraps food properly before it’s put in the refrigerator.

Although you once thought you and your spouse were kindred spirits, you now realize that there are many, many differences between you. You’re confused. You argue about everything. When you remind yourself you made a life-long commitment, you start to understand the real meaning of eternity.

Ironically, it is in the midst of feeling at odds with your once kindred spirit that you are faced with making all sorts of life-altering decisions, such as whether and when to have children, where to live, who will support the family, who will handle the bills, how your free time will be spent, how in-laws fit in to your lives, and who will do the cooking. Just at the time when a team spirit would have come in mighty handy, spouses often start to feel like opponents. So they spend the next decade or so trying to get their partners to change, which triggers stage three.

Stage Three- Everything would be great if you changed

In this stage of marriage, most people believe that there are two ways of looking at things, your spouse’s way and your way, also known as the Right Way. And rather than brainstorm creative solutions, couples often battle tenaciously to get their partners to admit they are wrong. That’s because every point of disagreement is an opportunity to define the marriage. Over time, both partners dig in their heels deeper and deeper.

Now is the time when many people face a fork in the marital road. Three choices become apparent. Convinced they’ve tried everything, some people give up. They tell themselves they’ve fallen out of love or married the wrong person and they divorce. Other people resign themselves to the status quo and decide to lead separate lives. But there are still others who decide that it’s time to begin to investigate healthier and more satisfying ways of interacting. Although the latter option requires a major leap of faith, those who take this leap are the fortunate ones because the best of marriage is yet to come.

Stage Four- That’s just the way s/he is

In stage four, we finally come to terms with the fact that we are never going to see eye-to-eye with our partners about everything and we have to figure out what we must do to live more peaceably. We look to others for suggestions; we seek religious counsel, talk to close friends and family, attend marital therapy, read self-help books, or take a relationship seminar. Those of us who are more private look inward and seek solutions there.

We more readily forgive our spouses for their hardheadedness, and recognize that we aren’t exactly easy to live with either. When disagreements occur, we make more of an effort to put ourselves in our partner’s shoes. We recognize that, as with everything in life, we have to accept the good with the bad. Fights happen less frequently and when they occur, they’re not as intense or as emotional as in the earlier years of marriage. And because we’re smart enough to have reached this stage, we reap the benefits of the fifth, and final stage.

Stage Five- Together, at last

It is really a tragedy that half of all couples who wed never get to stage five, when all the pain and hard work of the earlier stages really begins to pay off. Since you are no longer in a struggle to define who you are and what the marriage should be, there is more peace and harmony. You start “liking” your spouse again.

By the time you reach stage five, you have a shared history. And although you’d both agree that marriage hasn’t been easy, you feel proud that you’ve weathered the storms. You appreciate your partner’s sense of commitment to making your marriage last. You feel more secure about yourself as a person and you begin to appreciate the differences between you and your spouse. And what you don’t appreciate, you find greater acceptance for. If you have children, they’re older and more independent, allowing you to focus on your marriage again, like in the old days. And you start having “old day feelings” again. You have come full circle.

I’m certain that if more couples realized that there really is a pot of gold at the end of the rainbow, they’d be more willing to tough it out through the downpour. The problem is, most people fool themselves into thinking that whatever stage they are in at the moment, is where they will be forever. But it’s important to remember that nothing lasts forever. There are seasons to everything in life, including marriage. The wiser and more mature you become, the more you realize this. The more you realize this, the more time you and your spouse spend hanging out in stage five. Together again, at last.

Is Silence Sounding a Distress Signal in your Relationship?

Silence in a relationship can be deafening – drowning out the ability to listen to and hear your partner. If you and your partner have shut down, excluding any type of meaningful communication, you are at risk for a break-up … Read More